As the COVID-19 pandemic continues, the NFL remains steadfast in its belief that it can start its regular-season schedule on time.

Speaking to national reporters on a conference call Tuesday, NFL general counsel Jeff Pash said, “Our planning, our expectation, is fully directed at playing a full season starting on schedule and having a full regular season and a full set of playoffs. Am I certain? I’m not certain that I’ll be here tomorrow. But I’m planning on it.”

If that happens, Buffalo Bills wide receiver Isaiah McKenzie said that with Tom Brady out of the AFC East, the Bills are poised to knock the Patriots off their perch.

“Him leaving, our team is stacked and the last few years we’ve given him a run for his money and now that he’s gone, it’ll be the Bills’ time to take over,” McKenzie said via a Zoom conference call with Buffalo reporters Tuesday.

“What we did last year, we have to build off that. This year we’ve got some great guys coming in. I feel like we’ll have a chance to win the whole thing, if you ask me. We can’t be complacent, and when it’s time to roll, it’s time to roll. I hope everyone is doing their job in the offseason so when the season comes and we get this train rolling.”

McKenzie was made available to discuss his return to the team after a brief dalliance in free agency.

However, he made it clear to his agent where he wanted to be.

“Either way, I told him I wanted to be a Buffalo Bill,” said McKenzie. “Other teams came along and gave me offers, and Buffalo gave me a good offer, so I was like I might as well go back to Buffalo because I wanted to be there.”

McKenzie joined the Bills as a waiver claim from Denver midway through 2018 and played in seven games that season, catching 18 passes for 179 yards and also rushing 10 times for 66 yards when the Bills discovered his ability to operate on jet sweeps.

He has found a niche in Brian Daboll’s offense, though you have to wonder what his usage will be now that he’ll likely be no higher than fourth on the depth chart behind newly acquired Stefon Diggs and holdovers John Brown and Cole Beasley.

“I had no idea they were going to sign Stefon Diggs, but at the time, I just wanted to be in Buffalo,” he said. “I told my agent no matter what, I want to go back to Buffalo and he said we can make that happen as long as they gave me an opportunity. I always wanted to be back, no matter who came, no matter how many receivers they drafted, I felt like I had a role there and I want to build off what I did there and stay and not be hopping around. I feel comfortable about it, we’ve got Stefon Diggs and that’s even better; I like competition in the room.” 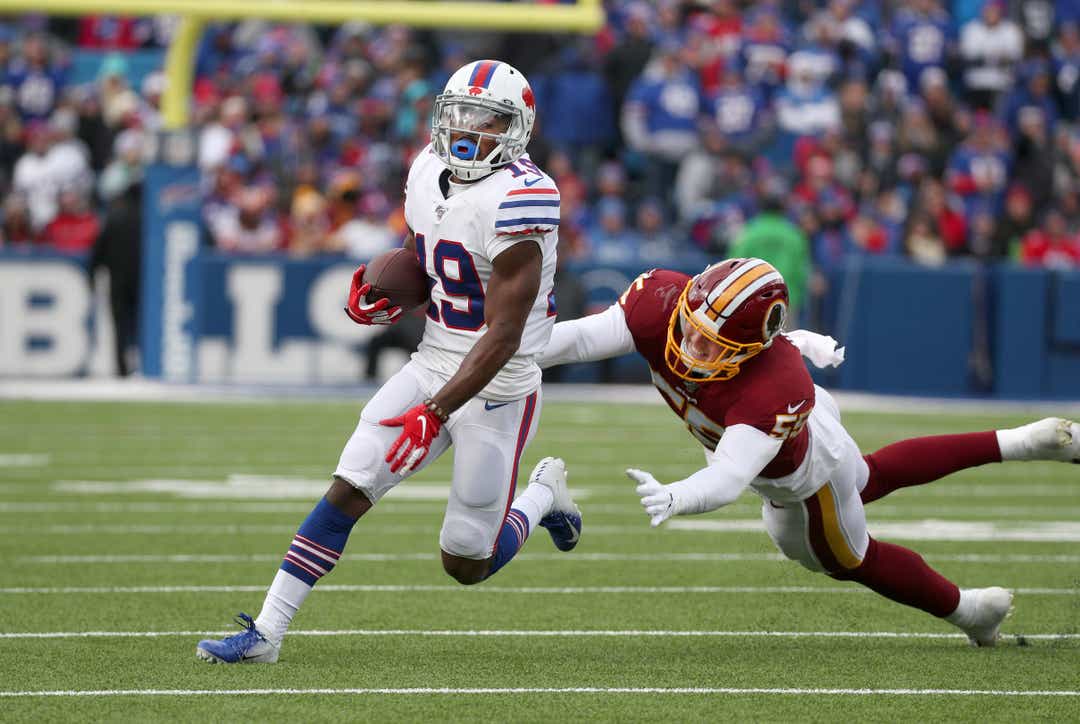 In a normal scenario, the Bills would be gearing up their offseason training program, but all team facilities are off limits right now, so the players are on their own to stay in shape and learn their playbooks.

That’s about to change, though, at 2 p.m. Wednesday.

“Right now it has been phone calls, but tomorrow we’re going to have our first meeting with position coaches (via Zoom) so I’m pretty sure things are going to ramp up,” he said. “After tomorrow we’ll start face-timing more and talk about more football things.”

For a team like Buffalo, which returns most of its starting group on both sides of the ball, plus has essentially the same coaching staff in place for a fourth straight year, this unusual offseason is less troublesome than it is for teams in flux with new coaching staffs.

“If we can meet over the phone or by video and things like that, that would give us the upper hand,” he said. “Even though everything is going on, if we stay in communication with each other and stay on top of everything, it’s a big thing right now because we can’t be there.”